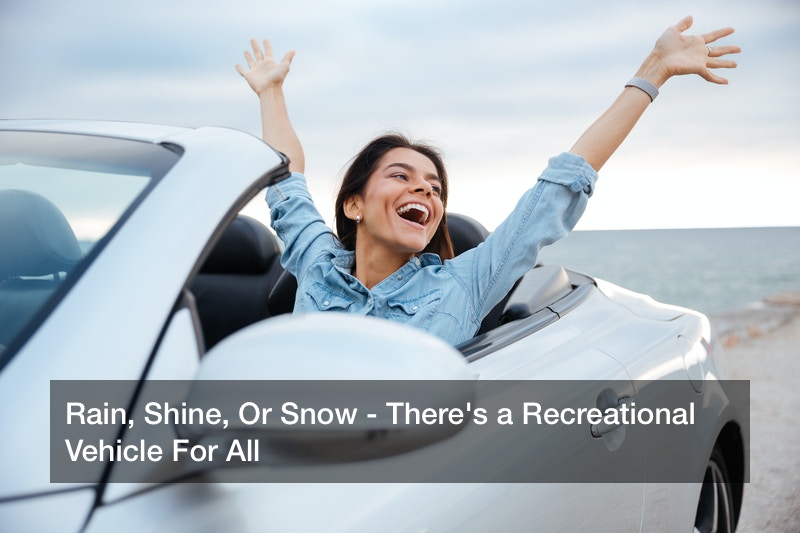 Rain, Shine, Or Snow – There’s a Recreational Vehicle For All

If you are looking for recreational vehicles, look no further than atv, dirt biking, snowmobiling, boating and watercrafts! Here, you will read the break down for each to help direct you on what you are looking for. Thought it should be noted, some vehicles are only appropriate during certain times of the year.

Parents all over the world take their children, or go by themselves, to share their love for the patience of fishing. Generally, you do this in a boat. And clearly, it is popular among many considering 15 million boats are bobbing to the waves in the United States. America, during 2016, even managed to rake in $3.6 billion in revenue from the sales of recreational boats.

Motorcycles And Its Ilk

Many individuals enjoy ripping through dirt with an ATV or enjoying a long ride with their motorcycle. Motorcycling is such a popular recreational vehicle, the United States during 2017, saw the sales of motorcycles reach 472,000. If you are not sure where to look for one, your first stop can be at your nearest motorcycle dealer and they’ll be happy to help you pick out the right one. However, it goes without saying: wear a helmet! Motorcycle collisions with other vehicles is as common as 75 percent, and if you wear a helmet, you can reduce the chance of a neck related injury.

When It Starts Snowing, Bring Out The Snowmobile

Stuck inside? That won’t stop a snowmobile! If you’re itching to ride your motorcycle, but can’t take it out of the garage, the next best thing is a snowmobile. A snowmobile, if the name hasn’t already given it away, is a vehicle that can ride in the snow using similar methods you see on tanks. Surprisingly, snowmobiles bring in $26 billion every year in the United States while Canada, a country you’d expect to top that, only brings in $8 billion; even Europe and Russia don’t come close with their measly $5 billion.